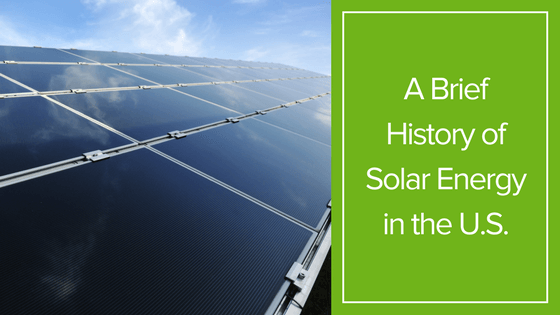 Far from being a new technology, solar power’s roots in the U.S. date back as far as the 1800s. The photovoltaic effect — the ability to generate usable energy from light — was first demonstrated in 1839. By the end of the century, American inventors were patenting a primitive form of solar panel that would form the basis for modern-day PV cells.
The next big leap in solar technology occurred in April 1954, when engineers from Bell Laboratories announced the invention of the first practical silicon solar cell. Though expensive to produce and generating only around 6 percent efficiency, publications hailed the invention as a revolution in solar energy. Famously, the New York Times called it “the beginning of a new era.”

Birth of the Alternative Energy Movement
Ultimately, it would be some time before solar energy saw widespread adoption in the United States. In 1973, early solar pioneer Karl Wolfgang Boer built was what arguably the country’s first solar-powered building using cadmium sulfide (CdS) platelets. Boer, working out of the University of Delaware, dubbed this project the Solar One. Boer later went on to found the American Solar Energy Society and became a critical voice advancing the cause of alternative energy in the country.
With the 1973 gas crisis bringing into sharp relief the economic impacts of our reliance on fossil fuels, a push to develop alternatives to gas and oil began in earnest. In 1984, the Solar Energy Generating Systems (SEGS) facility was completed in California’s Mojave Desert. SEGS, consisting of nine separate solar energy plants, to this day remains the second-largest facility of its kind, capable of producing 361 MW of power at a time.

Solar Takes Off
Despite advances in technology, solar remained a niche interest for much of the ‘80s and ‘90s. In 2003, President Bush installed a nine kilowatt-hour photovoltaic system in the White House. In the following years, the respective governors of California and Kansas would introduce aggressive initiatives calling for the widespread adoption of solar power in both states.
But the biggest change in the history of solar in the U.S. was the passage of the 2009 stimulus package. This package earmarked more than $25 billion in funds for alternative energy subsidies. At the same time, advances in technology and increased manufacturing capacity were making solar cells more affordable and efficient — in short, it was the perfect storm of factors to create a solar boom in the U.S.