Home | Blog | Climate Change and Solar Power: What You Need to Know 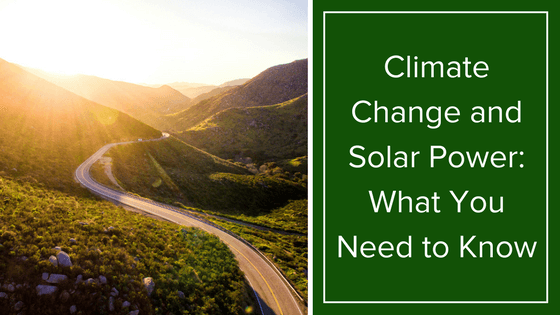 It’s an undeniable fact that human activity — in particular, burning fossil fuels — is having a permanent, big-picture impact on the planet’s climate. A full discussion of the current scientific understanding of climate change is beyond the scope of this article, though the main takeaway is easy to understand. To prevent a dramatic change in our planet’s climate, we must take steps to reduce carbon emissions today.

The gravity of the situation and the need for action is increasingly well-known. A 2017 Gallup poll found that concern about climate change had reached a three-decade high. According to the survey:

Though it’s easy to feel powerless in the face of issues such as global climate change, there are individual steps we can take today that will put us collectively on the right path.

Carbon emissions are measured in metric tons. A lot of things produce carbon emissions, including heating and air conditioning, travel and transportation, farming and more. The average American has a carbon footprint of 20 metric tons per year. To put that number in perspective, the annual global average is just four tons per person.

When it comes to reducing your carbon footprint, change begins at home. Household electric power accounts for a plurality (39%) of Americans’ of energy consumption. Most people get their power from either natural gas (33%), petroleum (28%) or coal (17%). Given the high energy use of a typical home, offsetting your reliance on these fuels even a little bit can have a significant effect.

Solar power is reliable and readily available, making it the best renewable alternative on the market today. The numbers speak for themselves. Though solar panels do require resources to manufacture and transport, once installed, they are completely emissions-free. A home that uses solar to generate just half its energy needs will prevent the release of an estimated 100 tons of carbon into the atmosphere.

Why It’s Worth It

There’s no way of knowing what the future impacts will be if climate change is left unchecked. Already today we see rising sea levels, melting ice caps and stronger, more unpredictable storms. In the future, these climate change effects may lead to increased droughts and higher food prices, significant infrastructure damage in coastal cities and higher global temperatures that render vast portions of the planet uninhabitable. With this will come greater insecurity, increased poverty and widespread disease, effectively reversing much of the developmental progress made over the past century.

This is a bleak picture, but it’s not the only future possible. By taking action today and making renewable energy a priority, we can help secure a better world for everyone. To learn about your options for going solar at home, contact Bright Eye Solar today.