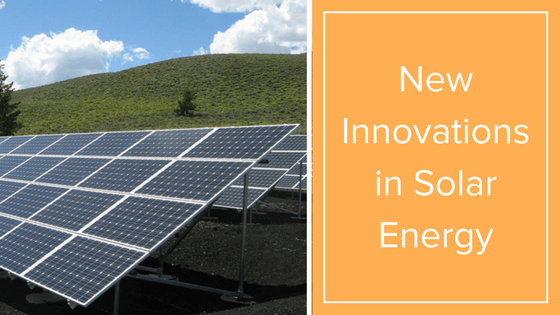 Recent advances in photovoltaic (PV) technology have played a key role in the growth of solar power worldwide. As solar technology becomes cheaper, more convenient and more efficient, it spurs further investment in research and development, creating a cycle of ongoing innovation driven by market demands.

That’s good news for both current solar users and for anyone considering switching to renewable power in the future. While today’s solar products are better than ever before, there are plenty of exciting innovations on the horizon. Let’s take a look at some of the most promising.

A PV cell’s ability to efficiently convert light into usable energy is critical to the widespread adoption of solar. There is a direct correlation between the popularity of solar and the commercial availability of cells with an efficiency rating of 20% or more.

Today, researchers are on the verge of a significant step forward in this regard. A team at Technion-Israel Institute of Technology in Haifa, Israel have developed a new kind of PV cell using a photoluminescence material capable of producing energy with 50% or more efficiency. The team recently published its preliminary results in Nature Communications and aims to bring its product to market within the next five years.

Solar roofs are now a common sight, but several companies want to change that. Tesla and other prominent manufacturers are currently leading the development of “solar skins” — PV cells that are indistinguishable from conventional building materials.

Despite its obvious benefits, many people are resistant to fully embrace solar in part because they don’t like the way it looks or are prohibited by their homeowners’ association from doing so. Solar skins replicate the look and feel of roofing products such as slate and asphalt shingles while still delivering efficiency levels comparable to some of the best conventional PV cells on the market today.

If you’ve been considering installing a solar roof but are worried about your curb appeal, you may be in luck. Tesla solar skin shingles are currently available for pre-order, and several other companies are planning to bring similar products to the market shortly.

Moving from the realm of the every day to the sci-fi, in just a few years we may all have tiny solar panels woven into our clothes, generating electricity as we go about our day. A team at the University of Central Florida is currently testing the use of perovskite ribbon, an ultra-thin PV material that can be threaded into conventional fabrics.

Imagine never having to look for an outlet to charge your phone again. With wearable solar, this could very well be a reality in the near future. Beyond clothes, the technology could also be used in cars, buildings, window curtains and more.

Looking to the Future

Solar may be a relatively new technology, but it’s one that is evolving rapidly. At Bright Eye Solar, we’re committed to bringing our customers the best products on the market today. Get in touch to learn what’s currently available and how we can help.