Home | Blog | Solar Energy Around the World: How the U.S. Compares 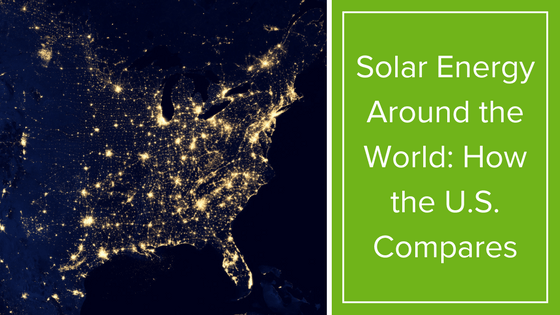 All around the world, businesses, governments, and individual consumers are waking up to the power and potential of solar energy. While part of this is due to a growing awareness of the threat of climate change, recent improvements in solar technology — combined with more affordable photovoltaic (PV) systems — have played a key role in the global adoption of solar.

2016 saw the most dramatic evidence of this trend yet. The Guardian reports that, in one year, new solar capacity rose by 50%. All told, the total amount of solar technology installed worldwide is now capable of generating 305 GW of electricity.

These numbers may be impressive on paper, but where does the U.S. stack up in relation to them? Let’s take a look at how we compare to some of the international solar energy leaders.

Looking at the numbers alone, China is the world’s undisputed solar champion. The country has taken ambitious steps to transition from coal and other energy sources towards renewable power. As of 2016, China has a total generating capacity of 78.1 GW — and is on track to double that amount by 2020.

The United States, on the other hand, currently generates 40.3 GW of solar power — a respectable number that places it fourth overall, behind Japan with 42.8 GW and Germany with 41.2 GW.

While China’s embrace of solar is remarkable, some context is required. With a population of 1.371 billion, solar still amounts to just a small percentage of the country’s total power consumption. To see the extent to which solar has become a part of the average person’s life, it is illustrative to look at solar use per capita. By this metric, Germany is the global leader, producing 511 watts per person. It is followed by Japan’s 336 watts/capita and Italy’s 322 watts/capita. Sadly, the U.S. still has some work to do to catch up with its European peers — per capita, we are only producing around 125 watts per person.

When it comes to renewable energy, there is always room for countries to improve. Perhaps the most hopeful method of measuring a country’s climate leadership is by looking at its embrace of solar on a year-by-year basis. By this, we can extrapolate general trends and gauge the level of political and popular support for solar energy.

When looking at annual added PV capacity, China once again comes out on top. In working towards its ambitious goals, the country boosted its overall capacity by 34.5 GW in 2016. However, the U.S. found itself in a strong second place, increasing its capacity by 14.7 GW. Rounding out the top five were Japan with 8.6 GW, India with 4.0 GW and the United Kingdom with 2.0 GW.

The Global Push for Solar

While these numbers are good news for the environment, ultimately change requires taking action at the individual level. Want to learn how you can adopt solar in your home? Get in touch with Bright Eye Solar today.