Solar power is one of the top options for alternative, clean energy. Solar panels convert sunlight into electricity, while traditional energy sources draw power from fossil fuels like coal and natural gas. Fossil fuels are a finite resource, but solar power is renewable source of energy.

People have recognized the value of solar power, and this energy source is on the rise. Within the next five years, the market is expected to triple in size, according to the Solar Energy Industries Association.

The top 10 states with the most megawatts of solar power installed through last year are:

Solar panels can be designed to power anything from a single-family home to an entire office building — and with benefits that range from environmental impact to cost savings, solar panels are natural opportunity for universities and K-12 school districts, too. Here is everything you need to know about installing solar panels on a university campus. 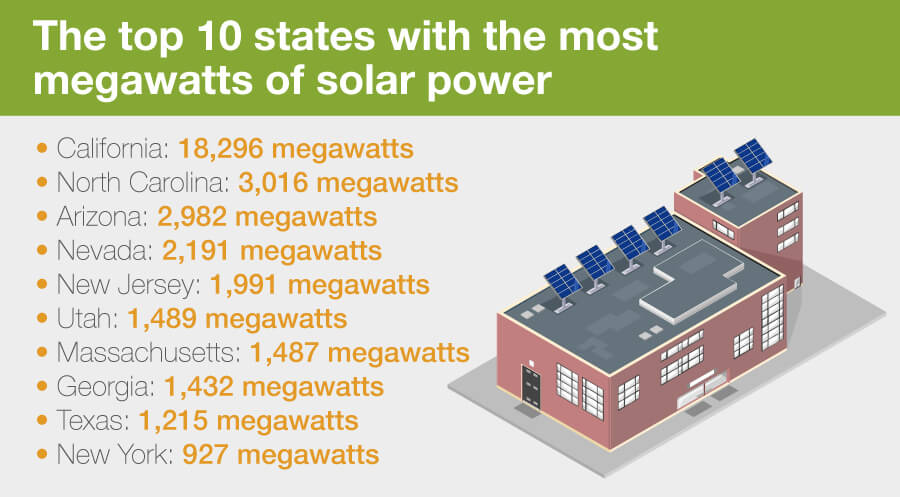 The Different Types of Solar Power

The two most basic types of solar power are active and passive. Active solar technology uses either an electric or a mechanical device to convert sunlight into energy, while passive solar technology does not use any supportive devices. Instead, passive solar power is achieved through design. Strategically placed windows and specific building materials can naturally take advantage of the sun’s energy for warmth and cooling.

The Cost of Installing Solar Panels

A solar panel system is an expensive investment, but the price is not nearly as high as it once was. As more individuals and businesses are investing in solar power, the installation prices are beginning to drop. From the fourth quarter of 2015 to the fourth quarter of 2016, solar prices dropped 29 percent. Since 2011, prices have dropped 67 percent.

The cost of solar panels for universities will vary based on the scope of the project, as well as the location of your university or college. A list of total costs includes:

The soft costs of solar power, such as labor, overhead and supply chain, will likely be the biggest line item.

This incentive will cover 30 percent of the cost of acquiring and installing solar panels at a college or university. Academic institutions can also seek out state grants and incentives to help bear the cost. Look at the Database of State Incentives for Renewables and Energy to find what incentives are available in your state.

Five simple steps can help you determine the return on investment for a solar panel system:

During the agreement, the developer is responsible for all maintenance on the solar panels. The developer makes a profit on the energy sales, while the university will generally pay a lower electric bill. Since developers are for-profit entities, they will also be able to take advantage of tax credits that the nonprofit university cannot.

PPAs have the potential to generate significant cost savings and dramatically improve greenhouse gas emissions. For example, Colonial School District in Pennsylvania entered into a PPA with Tangent Energy Solutions and a third-party investor. Through the PPA:

According to Tangent Energy Solutions, the solar panels are expected to:

While solar panels require a significant upfront investment, these systems immediately begin generating cost savings. The energy the solar panels generate for the college or university is free.

Just how much in savings solar panels will earn for a university depends on many different factors. First of all, location is everything. Is your institution located in a state that receives consistent hours of sunshine? More sunshine means you can invest in a smaller solar panel system to generate the electricity you need. If you are in a state that receives less sun, like Alaska, you will have to invest more in a larger system. The efficiency of your system will play a significant role in cost savings generation.

States also have different utility policies that will play a role in how much solar can save universities and colleges. Most states have net metering polices, which are designed to support the growth of renewable energy including solar panels, small wind power generators, methane digesters and natural gas micro-turbines.

If your university or college is in a state like this, your savings may not be as significant when compared to an institution in a state with decoupled utilities. Seventeen states have electric decoupling policies, while four states have pending policies, according to the National Resources Defense Council.

Colleges and universities are not the only academic institutions that stand to earn significant savings from solar power. A report from The Solar Foundation and Solar Energy Industries Association found solar panels at 450 school districts with K-12 schools could save each district more than $1 million over 30 years.

The Benefits of Going Solar

Cost savings can be a significant benefit of going solar, but electricity generated by fossil fuels is still relatively inexpensive. Therefore, switching to solar might mean a school’s electric bill is roughly the same as it was before. But the electric bill is not the only reason to consider this alternative energy source. Investing in solar represents a choice to invest in a clean, sustainable source of energy.

Beyond cost savings, benefits include:

Additionally, solar panels are guaranteed to work for 20 to 25 years, with most manufacturers promising their products have 80 percent performance after the first 25 years.

Colleges and universities can consider solar power an investment in a sustainable future.

Universities and colleges that use solar panels have an educational opportunity for their students. From research and installation to maintenance and monitoring results, universities can provide their students with an insight into how solar power works. Students in the science, technology, engineering and mathematics (STEM) fields can learn invaluable lessons from an institution’s decision to install a solar panel system.

Reach out to professors in the STEM fields at your university and get them involved. Ask them to take advantage of onsite solar panels and include them in their lesson plans. University leadership can even build extracurricular activities around solar power. Students can learn how solar power works and help track the panels’ efficiency.

Solar Panels as a Part of Your University’s Image

Most colleges and universities remain dependent on grid electricity. Those institutions aggressively pursuing renewable energy projects are seen as trailblazers in the struggle to reduce carbon emissions. Adopting solar panels will garner attention and change the way people think about a university.

Image is everything as students consider which colleges and universities they want to apply to and attend. More than half of prospective college students (63 percent) want to know about a college’s environmental stance and would consider this information in their decision-making process, according to a survey conducted by The Princeton Review.

More and more students are noticing what universities and colleges are doing to go green. Many organizations are putting together lists of the greenest college campuses. Colleges with solar panel power are going to stand out as students decide where to apply. Consider how such a positive element of your institution’s image could impact student enrollment.

Adding solar panels can be a daunting prospect. The technology is relatively young, and your institution would have to commit to a significant investment. But, universities and colleges do not have to enter these projects without any guidance. Some higher education institutions have already successfully taken the solar plunge. Look to these organizations to see how they adopted solar panels and what the results have been thus far.

Here are just five of many universities that have installed solar panels:

Solar energy is gaining traction across the country at businesses, private homes and academic institutions. The benefits are clear, and as more institutions embrace solar power, the price of the technology is dropping.

If your university, college or school district decides to harness the power of the sun, remember it is important to pick the right partner to help you design and install a system that fits the needs of your school. When you’re ready, reach out to us to learn more about making solar panels a reality at your university. Get a quote from Bright Eye Solar today.