Home | Blog | Sustainable Cities That Lead the Way in Solar 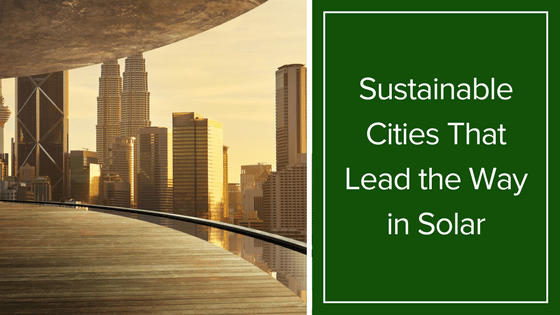 Solar energy is good for the environment, good for the economy and increasingly a source of municipal pride. In this article, we’ll look at a few cities across the country that have emerged as sustainability leaders in recent years — and the examples they can set for solar energy in Pennsylvania.

When it comes to the sheer amount of energy generated, Los Angeles is America’s solar heavyweight. By the end of 2013, the city had a cumulative solar capacity of 132 MW. Aggressive investments at the state level, combined with partnerships between the city’s public utility provider and local solar producers, have been critical to this.

LA is on track to meet its goal of generating 33% of its total energy from renewable sources by 2020. This project, which is estimated to create more than 2,000 jobs and generate $200 million for the local economy, is proof that solar has economic benefits, too.

Sunny Honolulu seems like the obvious choice for solar power, but it wasn’t always this way. High energy costs in the Aloha State created the political will for a solar revolution. In just a few short years, more than 200 MW of PV power have been installed on the islands, drastically reducing residents’ reliance on fossil fuels.

Honolulu has been one of the biggest beneficiaries of this. In 2013, the city was the largest per capita solar energy producer in the country, generating 265 watts of power for every person in its urban area.

Portland, Oregon is proof that solar success isn’t limited to sunnier climates. In 2007, the city was selected to be a part of the Solar America Cities program, opening up access to federal funding and resources.

Local nonprofits such as the Energy Trust of Oregon have emerged to provide grassroots support for residents interested in collective purchasing programs and other energy-saving options. At the municipal level, planning agencies have made the solar permitting process simpler by creating an online portal.

While Portland has yet to replicate the successes of LA or Honolulu, it’s proof that successful collaborations between government, nonprofits and engaged citizens can make alternative energy accessible.

Pennsylvania has a long way to go to catch up with other solar cities. In 2013, Philadelphia generated just 9 MW of power from solar sources — less than one-tenth of the total produced in similarly-sized Phoenix, AZ. Pittsburg rated even worse, generating just 1 MW of solar energy in that same year.

Pennsylvania’s cities can look to nearby Indianapolis for guidance. Starting in 2010, the city rapidly diversified its energy portfolio, implementing a feed-in tariff program that paid solar producers above market rates. The effect was transformative — by 2013, the city was producing 56 MW of power, placing it seventh in the nation in cumulative capacity and fifth in per-capita generation.

If solar energy can work in Indianapolis, it can work in PA, too. To learn more about how you can start your own solar revolution, contact Bright Eye Solar today.