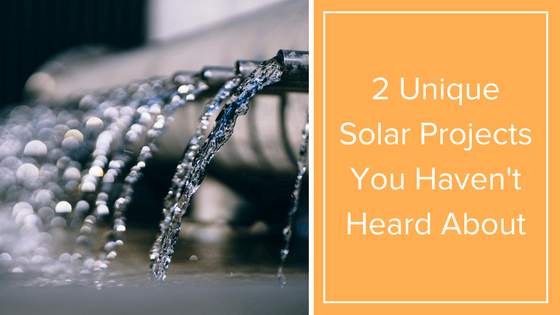 Solar panel installations are common enough that most people have a fairly accurate understanding of how they work and what they can do. However, one byproduct of the recent solar energy boom has been a renewed interest in pushing the limits of the technology.

While many companies are actively investing in research to develop more efficient or more affordable solar panels, others have more obscure goals. In this article, we look at two creative outside-the-box applications for solar technology currently in development.

It estimated that nearly 1 billion people worldwide don’t have reliable access to clean, drinkable water — a number that will only go up as the earth’s climate becomes less predictable and droughts increase. The global extent of water scarcity is something that is often overlooked in discussions of climate change, though one group of researchers is attempting to change that.

A team at MIT and UC Berkeley is currently prototyping a solar-powered device that draws potable water from the air — without requiring an external power source. The device uses a metal-organic material made from zirconium and adipic acid that collects water molecules from the atmosphere and releases them into a condenser, where they are collected for use.

One kilogram of the material can reliably produce three or more liters of drinkable water over a 12-hour period. If brought into production, the device will be especially useful in developing countries, where a lack of infrastructure requires solutions that are easily portable.

In one sense, roads are an ideal application for solar technology, given their constant exposure to the sun. Currently, ambitious companies are teaming up with municipalities to test ultra-durable photovoltaics that can be installed directly onto a road’s surface. A pilot project is currently underway in Tourouvre, France, with other installations planned for Calgary and Georgia in the near future.

Solar roads present some obvious technical challenges. Solar panels must be tough enough to withstand the weight of an 18-wheeler, as well as shifting temperatures and constant battering by the elements. As technology evolves, however, the potential for harnessing the power of the road will only grow.

Though it will be some time before their use is widespread, solar roads have several potential applications. Power generated from them can be fed into the grid or used to power streetlights and billboards. One company is testing solar-powered electric vehicle chargers. Only time will tell if any of these innovations catch on.

If you’re excited about these innovative solar projects, the best way to show your support is to start using solar energy in your home. The more residential and commercial customers switch to solar, the stronger a message it sends that this is a viable technology worth exploring further. Plus, you’ll save money on your utility bills and enjoy freedom from the grid! To learn more about the benefits solar can have for your home or business, contact Bright Eye Solar to arrange a consultation today.